Shop outside the box for your special someone this Valentine's Day.
The perfect gifts for music lovers are the ones that allow them to appreciate music even more, or show off their love of music. These 5 locales in Macon offer gifts that are designed to do just that and are some of the best music gifts you can give.

Your Valentine can relive the days of the Allman Brothers Band and other musical icons with their very own Kirk West photo from a wide range of music genres, from rock to country and blues.  Gallery West displays a generous overview of Kirk's personally selected favorite shots, including many of the Allman Brothers Band, for whom he worked as tour manager beginning in 1989.  Other images featuring onstage and offstage shots of legends such as Jerry Garcia, Little Feat's Lowell George, Muddy Waters and many more.  Gallery West makes their photography accessible to a wide audience, which is why customers won’t have to empty out their wallet to purchase a snapshot from rock-n-roll history! 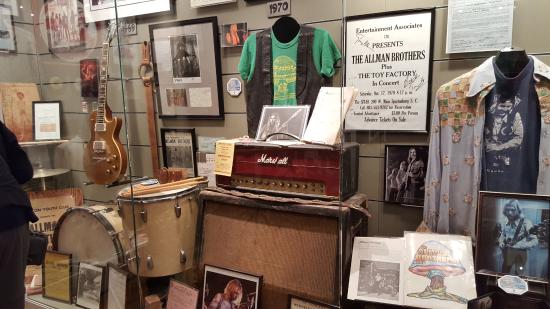 “This was a crazy, insane house … basically a frat house, but to the 10th degree,” Conan O’Brien said of The Big House while interviewing Gregg Allman in May 2012. “Now, they’ve turned that house into a museum!” Give the music lover in your life a chance to relive what it was like back in the day on Vineville with single and/or annual passes to the Big House Museum.  You can also pick out beautifully designed prints or concert posters from their gift shop for that special someone's Valentine's gift.

Born from Macon's DIY scene, Fresh Produce Records sells used vinyl records as well as a wide selection of new independent releases. In addition to their classic vinyl, Fresh Produce offers a wide variety of genres and style on tape,cds as well as music apparel.  Fresh Produce host shows in the store as well as another venues in town in order to help local musicians release their music.